Benzwin 2000 software acquires test data, presents it in realtime graphical format and produces reports both graphically and in tables.

Reports can be graphic in the form of histograms which plot test results including deviation, memory, variation of tolerance, consistency, etc. 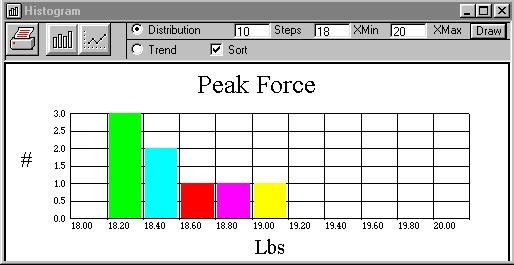 It can automatically adjust and run several tests simultaneously and can run tests for days without operator-defined file sizes. Data entry follows standard procedures common to many software programs, making Benzwin 2000 easy to learn. Data entry is automatically saved as it is entered, so it is easy to run.

With Benzwin 2000 an operator can easily configure test parameters and can later adjust them to reorganize test results for different needs.

Process control testing is simplified as the operator sets acceptable test limits (gate parameters). If data fails the tests, the failure is highlighted in red in the test report.

Benzwin 2000 is important for ISO 9000-registered facilities. Its transducers (load cells) document test conditions such as force, temperature and deflection, and the conditions can be included in the test results. Results can be identified with serial numbers and the testing instruments' last calibration dates. Traceability is thus built into the system, and operators are reminded when equipment should be reinspected.

Benzwin 2000 is also compatible with many other testing instruments.

Its cost includes personal support by an assigned Benz software technician. Any upgrades within 12 months of purchase are free. Benzwin 2000 files can easily be exported to other programs that accept comma delimited files with the click of a button.

There are other tests and standards around the world. Please ask about the appropriate testers.